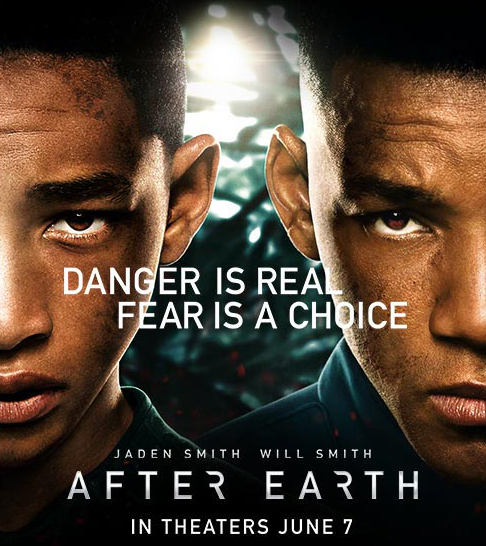 The new full trailer for After Earth, one of the big Hollywood post-apocalyptic movies to be released in 2013, has just arrived.

In the movie, Will Smith and his real son Jaden are the leads in After Earth, where they play father (Cypher) and son (Kitai Raige). It’s the second time that they play father and son on screen, 7 years after The Pursuit of Happyness.

In After Earth, they are on a mission gone wrong when their plane crash-lands onto Earth, a thousand years after humanity was forced to leave the planet because of cataclysmic events.

As Cypher is critically injured in the crash, Kitai must embark on a journey to signal for help, and face different challenges: uncharted terrain, hostile environment, new animal species and evolved alien creatures hunting him. Father and son must learn to work together and trust each other to have a chance to save their lives.

If you are curious and want to know more, bits and pieces of the backstory have been released in the last year. More on why Earth was abandoned, how humanity left, and how did humans colonized space can be found in After Earth’s official website (honestly, quite poor), in After Earth’s official Facebook page, in the After Earth ghost stories series, available in e-books and comics (an excerpt of After Earth: Ghost Stories: Hunted can be read on io9.com), or even in the viral video released by Sony’s Columbia Pictures last year:

After Earth is directed by M. Night Shyamalan, whose name is not mentioned in After Earth’s last trailer. Somebody thinks this might be Sony’s marketing choice given the low popularity of Shyamalan’s latest movies: Lady in the Water, The Happening and The Last Airbender haven’t been as positively reviewed as his first thrillers The Village, Signs (starring Mel Gibson) and The Sixth Sense (starring Bruce Willis). The Last Airbender even won the 2011 Razzie Awards as Worst Picture of the year. So, After Earth would be Shyamalan’s second (third? fourth?) chance.

After Earth risks to be another $130 millions high-budget, action/special effects-packed, stellar cast, and overall clichè-plot bad movie. But the new trailer, more about the characters, opens up more of the story than the previous, more about the action, so I still have hopes that the full movie is going to reflect this switch, and focus more on the drama, the characters, their relationship rather than the special effects or the post-apocalyptic setting.