Rosa is a post-apocalyptic animated short film, created in 2011 by Jesús Orellana, a Spanish comic-book artist. It takes place in a post-apocalyptic world where all natural life has disappeared. Rosa is a cyborg, deployed from the Kernel project, that represents mankind’s last attempt to restore the earth’s ecosystem.

The plot itself is quite simple, but Rosa is visually fascinating and rich of amazing graphic details.

What is amazing is also the story of its road to the success. 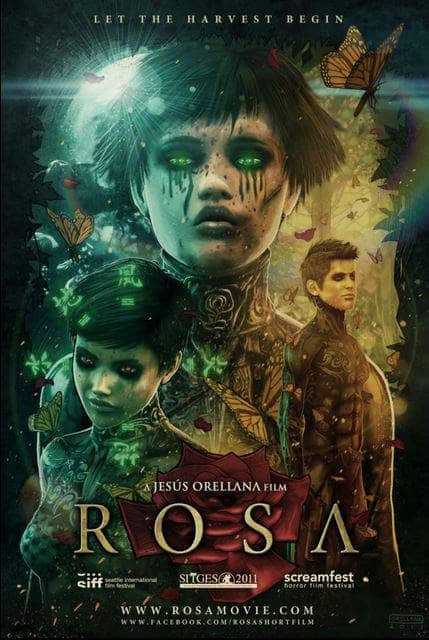 Rosa is a home-made production, created by Orellana in his Barcelona basement with his home computer, using self-taught programs, on a next-to-nothing budget ($100 for music licensing). It is Orellana’s first production, made to show his vision for a live-action project he hoped to direct.

As Orellana says in Rosa’s Facebook page, nothing else but his ideas and willing was behind Rosa which had no budget, no funding, no support from film-schools or industry contacts, no distributors.

Rosa was completed at the beginning of 2011. In a few weeks, after uploading the teaser to YouTube and sending the short film to a few websites for reviews, things started moving very very quickly, as Orellana remembers in an interview with cinemania.es.

Rosa was selected for the Seattle International Film Festival and Toronto World Wide Film Festival. Then, it played at a number of international festivals including Anima Mundi, SITGES, Toronto After Dark, ScreamFest, among others (it has also been nominated for Best Animated Short Film at the 26th edition of the GOYA Awards in 2012).

Following the successful festival run and its viral spreading on Internet, including positive mentions on popular entertainment and media magazines (such as The Hollywood Reporter and Wired.com), Rosa caught the attention of Hollywood’s producers and studios.

At the end of 2011 20th Century Fox and Orellana signed a deal. A live-action feature of Rosa, to be directed by Jesús Orellana himself, is now on its way – a script writer has been chosen, who will work on the script, to be based on an original story by Orellana and built on the storyline and the characters of the short.

Isn’t that a beautiful story? Good luck to Jesús with his new project.