Guardian Centers, in Georgia, USA, is a very special place. It is, in fact, the most advanced disaster training center in the world. 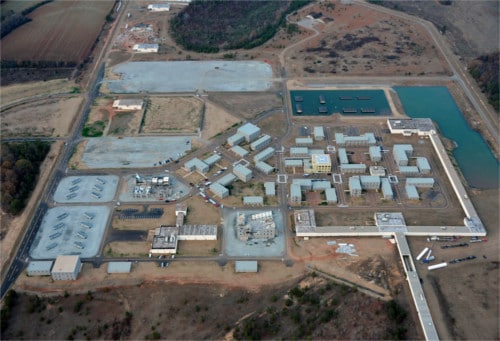 The idea behind the Guardian Centers is to give first responders simulated (but extremely realistic) experience of a natural or man-made disaster, providing them with the best place to improve interagency disaster response.

The center began being fully operational in 2013 (construction was completed in December 2012), but the idea was actually born a few years before.

Burkart, who had been actively involved in the post-Katrina rescue and logistic operations while working as director of flight operations for BellSouth, was of the opinion that the main problem was the lack of coordination between all the entities, both government and private, coming in to help.

Investigating this issue and talking to several people working in public agencies and private entities involved in the Katrina rescue operations, he realized that one of the causes of this lacking was that the subjects involved didn’t have a facility to do joint operational training on a massive scale.

After 4 years spent researching and developing the concept of such a facility, Burkart was finally able to find a couple of major investors that allowed this idea to come into being.

And it really sounds an expensive project: its final cost seems to be in the region of $50 Billion. But if you keep reading, you’ll easily understand why. 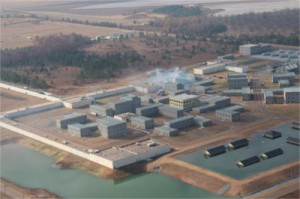 The Guardian Centers in Georgia, built on the area of the former Northrup Grumman missile plant, is massive.

The attention to the details in the Guardian Centers is amazing.

The 51 buildings in the town replicate life in a major city: there is a school, a day care, a hospital, a medical supply store, a restaurant and even a hotel, and their interiors are decorated with furniture specific to each business.

The houses in the flooded neighborhood have backyards with swing sets, chain link fences, clothes and toys that float during the drills, and they even have attics, to help replicate rooftop rescues.

And 300 cars, crossover and SUVs, rendered unsalable during Hurricane Sandy and donated by Chevrolet, one of sponsors of the project, are available for training purposes. 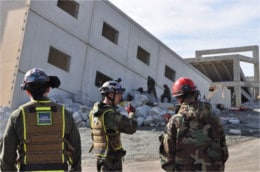 All of the structures, buildings and details have been designed with a purpose in mind: they contribute to conduct realistic, large scale emergency response exercises.

Guardian Centers offers in fact a fully operational cityscape simulator to test plan, skill sets, equipment and leadership abilities of the first responders to the 8 potential disaster scenarios defined in the US national document for emergency response planning, the National Response Framework (NRF). 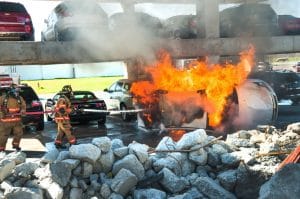 The disaster scenarios the Guardian Centers can simulate include natural and real-world manmade disasters.

For example, the collapsed buildings replicate consequences of an earthquake in urban context, and each floor can be set at a different position, changing every time the potential environment the responders have to deal with.

A 5.5 million-gallon basin filled with well water up to 8 feet cover almost entirely 8 houses designed to facilitate search and rescue training under flood conditions really similar to the ones post-Katrina. 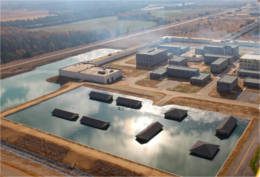 Fires’ and tornadoes’ effects can be replicated in several areas of the city, in the trailer park, in the subway too.

The facility is zoned to use toxic industrial chemicals in open air releases, and its laboratories are able to simulate chemical, biological, radiological, nuclear and high yield explosives attacks and threats. 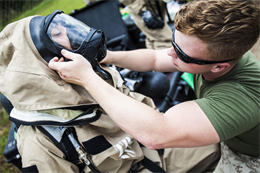 Most of the parts of the center are flexible and can be adapted to the different scenarios.

For example, the subway, actually built in a 1,800 foot sealed corridor used to move the missiles back and forth without detection by Soviet satellites, can be filled in with water or smoke, can simulate day or night, hot or cold, and includes special effects such as sparks and noise. 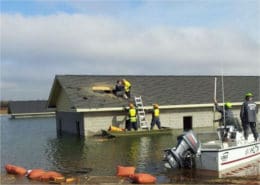 Buildings in the town can be built with breakable windows, can be breached, can be exploded and be burnt. The trailers can be burnt, crushed, torn apart. The interstate and all the street system can be packed with role players and abandoned vehicles.

While the Guardian Centers is a perfect place for small unit exercises with limited scopes (for example, hazardous material response training for the Marine Expeditionary Unit), its incredible level of realism, its flexibility, its infrastructural capacity allow it to be used also for extremely articulate large-scale training, with up to 7,000 participants belonging to multi-jurisdictional agencies and multiple emergency response organizations, both civilian and military. 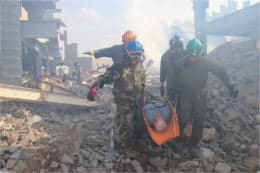 “There is nowhere like this where you can bring all agencies together and train in a real cityscape,” Burkart said. And that’s really where the Guardian Centers excel: this place is the perfect practice field where these different groups can test their ability to work together and improve the overall interagency emergency and disaster response.