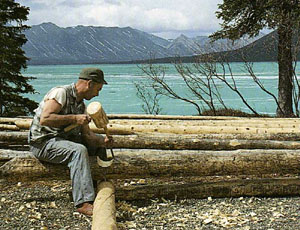 Have you ever had the idea of leaving everything behind you and challenging yourself to live a more natural and self-sufficient life in the Great Outdoors?

Dick Proenneke is a man who did it. He lived alone, for over 30 years, in the Alaska Wilderness, in a log cabin he constructed by hand.

His story is fascinating. Amazing is that he moved to the Twin Lakes, the place where he eventually built the cabin, at the age of 52 years old – not that young! – and lived there till he was 82 years old. During the 30 years from 1968 to 1999, he just occasionally went back to “civilization” to visit his family, for short periods only.

And amazing has been his whole life in the wilderness. Dick was a real outdoorsman, a great craftsman, and was able to survive and reach self-sufficiency in one of the most extreme places on the Earth – even if he occasionally got food and supplies by a friend by plane. 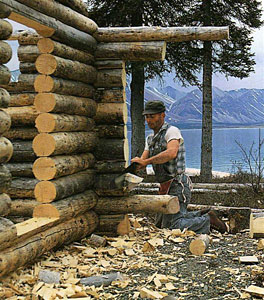 His daily life, the hard work, the extreme difficulties of his outdoor life but also the beauty of the nature and scenery, are described by film records he made himself, by his written journals and by his photography.

Dick filmed his adventures to show his relatives what life was like in Alaska. Bob Swerer Sr. & Jr. first met Dick Proenneke back in 1986, while filming wildlife in the area where Dick lived. They visited Dick several times, and took the best footage from Dick’s films to create some videos on Dick’s life, editing the video adding sound.

In Swerer’s documentaries you can see Dick in his daily activities (building his cabin, hunting and fishing for food, carving, canoeing, growing vegetables, exploring the area etc), and admire outstanding wildlife footage.

Alone in the Wilderness is the most famous documentary, produced by Bob Swerer in 2003, and aired a few times on PBS. You can watch 10 mins of the movie on YouTube:

Alone in the Wilderness: Part 2 is a sequel released in 2011, covering original footage. Other documentaries on his life, they too based on Dick’s original footage, are Alaska: Silence And Solitude and The Frozen North. 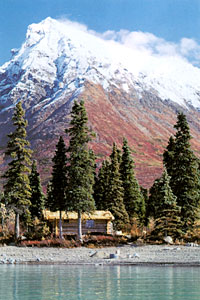 You can also read a book based on Dick Proenneke’s journals and photographs: One Man’s Wilderness: An Alaskan Odyssey, written by Sam Keith, a close friend of Dick, describes the first years of Dick’s life in the wilderness, and won the 1999 National Outdoor Book Award. 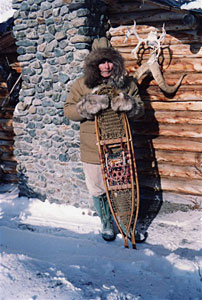 Original Dick Proenneke’s journals for the years 1974-1980 are available for free on the National Park Service website.

Dick Proenneke left Twin Lakes for the last time in 1999, at the age of 82 years old. The extreme cold and hard physical work were becoming too much for him and he moved to California to live with his brother his last 3 years of life till the death in April 2003.